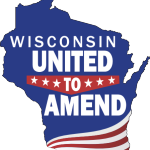 Thanks for your interest in helping United to Amend! The Democracy Reform Movement is growing and we need your help. We are non-partisan, grassroots and people powered. Our volunteers work in their local community to help educate and grow our movement.

Please sign up below and we’ll be in touch with details of how you can help. Or fill out our online Volunteer Form. It’s an easy form and it gives us a feel for what you’re up for…thanks!!

July 1, 2020: Why Do the Rich Have So Much Power? Paul Krugman via the NYTimes

May 5, 2020: On Wisconsin! 17 More Communities Join Call for an Amendment American Promise

April 17, 2020: Plain Talk: How long can Republicans ignore the people’s voice on redistricting? The Capital Times

March 31, 2020: Poll: 57% of voters say US political system works only for insiders with money & power The Hill

March 4, 2020: Fighting corruption can unite the American people The Fulcrum

February 26, 2020: Group organizes to get dark money out of politics Advance Titan

January 27, 2020: Take the Money and Run The American Prospect

January 21, 2020: Another Date That Will Live in Infamy: On the Tenth Anniversary of Citizens United The Montana Post

January 20, 2020: I’m a conservative against Citizens United The Hill

January 12, 2020: Ten years on, Citizens United ruling has changed U.S. politics — but not in the way many feared Los Angeles Times

December 29, 2019: The Citizens United ruling broke American democracy at the start of the decade. It never recovered Salon

December 21, 2019: America has ‘squandered’ the recovery and is falling behind the rest of the world, according to Harvard study Market Watch

December 20, 2019: Presidential elections have turned into money wars — thanks to a Supreme Court decision in 2010 CNBC

December 19, 2019: Listening to the call to save capitalism Khmer Times

December 5, 2019: For the young, getting big money out of politics is the cause of our time The Fulcrum

December 3, 2019: Presidential Candidates: What’s Your Plan for Draining the Swamp? The London Post

November 5, 2019: The Political Corruption Legalized by the Supreme Court The New Republic

October 15, 2019: Legalized Political Corruption Is So Much Bigger Than Trump: A Journey in 7 Charts Common Dreams

October 8, 2019: ‘Good!’ Says Sanders as Lobbyists Lash Out at Proposal to End Corporate Domination of US Politics Common Dreams

September 30, 2019: Democracy vs. Oligarchy: The Real American Divide is NOT Left vs. Right Milwaukee Independent

September 20, 2019: How to fix politics in America Politico

September 14, 2019: The Most Important Issue Missing From the Democratic Debates Washington Monthly

September 6, 2019: The Supreme Court has become just another arm of the GOP Washington Post

August 23, 2019: Convention of States Fires Up Base for Push to Rewrite U.S. Constitution Center for Media & Democracy

August 12, 2019: Making money off of politics isn’t new – it was business as usual in the Gilded Age The Conversation

August 7, 2019: Republicans should get behind the 28th Amendment The Hill

July 12, 2019: The two words we must hear at the next Democratic debate The Philadelphia Tribune

July 7, 2019: There is no ‘right’ v ‘left’: it is Trump and the oligarchs against the rest Robert Reich via Guardian

July 4, 2019: Americans must get mad enough to reclaim our democracy The Hill